Summary: Catholic jewelry is representative of different beliefs and views. This article dives into the depths of how people classify these pieces. 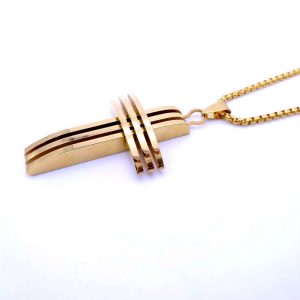 When it comes to the classification of Catholic jewelry, there are various pieces that symbolize different aspects of the religion itself.

Religious medals are only a small fragment when it comes to religious jewelry pieces. While some Catholics prefer to wear a medallion that depicts a saint, others tend to prefer a crucifix to symbolize their faith and provide an identity. There are even those that wear Christian jewelry for fashionable purposes.

The Symbolism of a Catholic Medallion

For those that wear a medallion that depicts a saint, it’s important to know that each saint is representative of something different. For instance, one could pray to a saint that is said to assist those that are in need of finding guidance in one’s life. Thus, the individual would wear that medallion to identify with that saint. For some that wear a medallion, there are those that feel safe and protected while maintaining a close distance to God. Additionally, they feel a sense of calmness and tranquility. This may be considered a psychological effect, but it is also a spiritual notion that many people believe in.

Other popular types of religious jewelry, or Jesus jewelry as many people like to call it, include simple bracelets, crosses, rings, and earrings that bear symbols of faith. Now, it’s important to understand that wearing a rosary is fashion the same way as a necklace, but it is not viewed as jewelry. Understanding the differences between this can save you from some awkward stares and some verbal exchanges in public. Now, the same can also be said for those that wear a rosary bracelet as well.